Robosaru is the centrepiece of all maps in OBEY. Bunnies in control of Robosaru earn 20¢ every 2 seconds, and gain a bonus 300¢ every time Uranium is placed inside the Feed Box. They also may purchase a Dropship at any time during their reign in Robosaru, for 1500¢.

Robosaru grants the Bunny in control an incremental money bonus the longer it is held. Every 2 seconds, the income from controlling Robosaru is increased by 0.075¢. This bonus is reset upon subversion. This means, for example, that after 8 minutes and 54 seconds, an unbroken reign in Robosaru will have allowed the income to double to 40¢ every two seconds.

The primary cannon (Action key) has infinite ammo and fires extremely rapidly. However, it is also terribly inaccurate, kicks up a lot of billowing smoke, and occasionally starts small fires. This not only makes it very difficult for the Bunny in Robosaru to determine whether or not they landed a hit, it also can provide a means of hiding for Bunnies who were not involved in the original barrage. The cannon cannot deal damage to Bunnies behind solid terrain, and due to a blind spot it is unable to hit bunnies who have made it inside of the Sentry ring. The cannon can and will destroy items, so care must be taken when firing it around stashes of expensive drops. 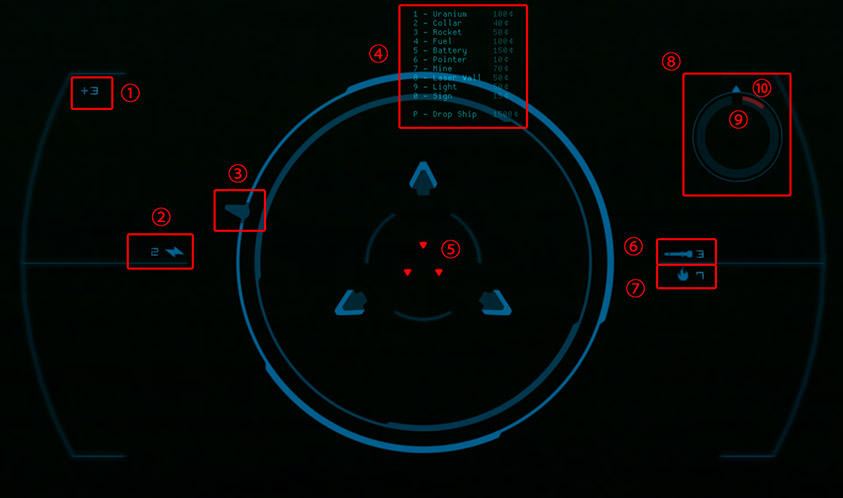 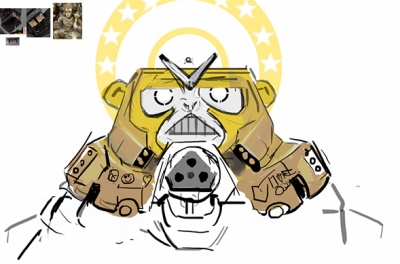 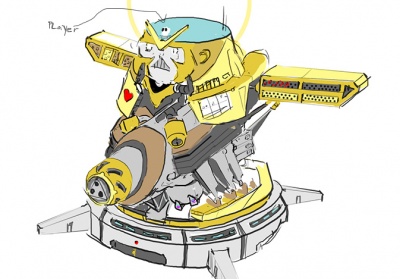 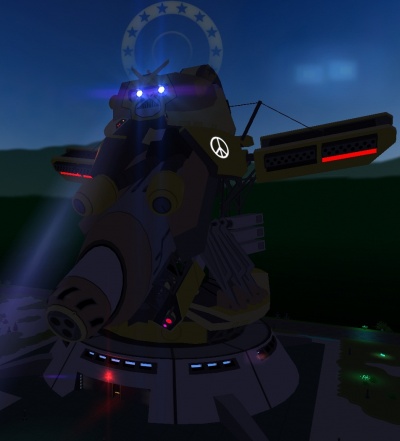 Robosaru also takes the form of a simian. Ostensibly the most intelligent branch of life on Earth, in this case the top of it's head is cut off. It's brain replaced with something else, something tiny that controls it instead, and for it's own purposes. Robosaru's face was also inspired by the monkeys in the 'Dinner of Doom'. Even though that ref was mostly lost as I worked it, I still think the metaphor is apt. One thing I usually don't talk about is that I try not to refer to Robosaru as 'him' or 'he'. It is neither. In fact, Robosaru was designed with feminine parts to not only emphasize sexual power/influence (besides the gun) but also to a lesser degree parental influence (which can sometimes take the form of illegitimate power). Note that Robosaru has 'breasts' and also the entry door is red and like a vagina (with a light above it like a clitoris), and the base supports sort of like open legs. It isn't as literal as the gun, but it is something I was thinking about when I designed it. When you gain power in OBEY, it isn't just meant to look like a tiny sperm taking power over a body, or a symbolic penis entering for the pleasure of it's owner, but also like the player is regressing to the womb in a sense. We are infantilized by the things we think we want. Consider about how often power leads to self destruction. (How many celebrities destroy themselves with drugs or financially after being able to get anything they want? Consider the Khmer Rouge wrecking what remained of Cambodia after realizing power and as an indirect result of that, themselves. Same with the 3rd Reich. Or repeated again with the hell created by ISIS's attempts at an Islamic Utopia.) There are many examples.