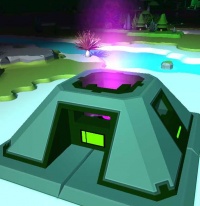 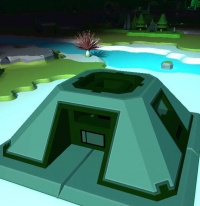 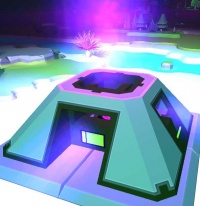 While in the "On" state, the Robosaru enjoys their passive 20¢ per 2 second income, in addition to their current reign bonus. If Robosaru is subverted, they will automatically drop 15% of their score (or 200¢, whichever is higher) as directives at the Drop Site.

While in the "Off" state, the Robosaru does not collect any passive ¢ income at all, although Robosaru's reign bonus still builds in the background. If Robosaru is subverted while the Power Plant is OFF, they are pardoned from dropping any subversion penalty money.

Upon subversion, any items blocking the exhaust may be forcibly destroyed.

If two or more Power Plants are linked to a single Robosaru, each Power Plant constitutes a fraction of Robosaru's regular income, and a fraction of the subversion penalty. For example, if there were two Power Plants on a map, and one was OFF, then Robosaru would only earn 10¢ every 2 seconds (instead of 20¢) plus half their reign bonus, and would lose 7.5% of their funds upon subversion (instead of 15%).

The 100¢ minimum subversion penalty is not reduced by having Power Plants partially disabled. All Power Plants must be OFF in order to drop no money.