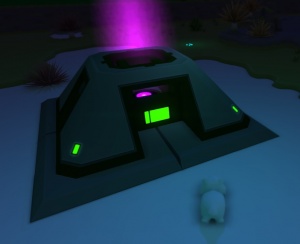 The Power Plant features a climbable slope with a jet flame protruding from the top and a control panel inside an aperture that is located on one side of a structure. The jet flame is only active when the Power Plant is in the 'On' state; it is deactivated in the 'Off' state.