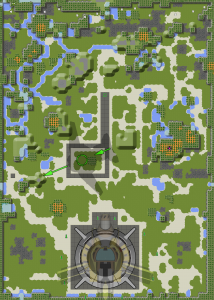 ZoneFar is a considerable modification of zoneOne. It retains the northernmost, western and southernmost features, but has its entire center and western areas reworked. Unlike its sister variant, Cornered, zoneFar has two large ponds that serve as hiding places: one to the west of the Drop Zone, and one almost directly along the path to the Feed Box. Surrounding the Feed Box though, is a complete absence of cover.

Cornered is a minor modification of zoneFar. The shortest travel path from the Drop Zone to the Feed Box, however, now runs behind the hill at the center of the map, giving Bunnies an opportunity to drop their collar and hide, or to conceal corpses here. Directly east of the Feed Box is also a large amount of terrain, and the Drop Zone is closer to the hilly region surrounding its west, making this map debatably easier for Bunnies to escape compared to zoneFar.

Doublel has two Feed Boxes, one is dangerously close to the Robosaru's entrance, and the other is far from Robosaru. The player in Robosaru must decide whether they allow Bunnies to place items in the closest Box, risking Bunnies making a quick and easy subversion should the Robosaru player look away, or let Bunnies travel to the far Box, making it easy for them to successfully deter from the path into cover.