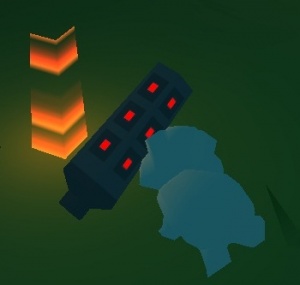 Missiles are a Robosaru usable item costing 50¢. When placed in the Feed Box, 6 shots will be loaded into Robosaru which can be fired with the Drop key. Loading Missiles into the Feed Box will drop money for the depositing Bunny if Autopay has been set.

Pointers are a Bunny usable item costing 10¢. They will display a marker at the targeted location that is visible to all players and Robosaru. Pointers are infinite use, but do require a short period of time after each use to recharge. This recharge period is localized to each pointer, so a Bunny can indicate multiple locations within a short period of time by using multiple pointers.

Fuel is a Robosaru usable item costing 150¢. When placed in the Feed Box, 12 ammunition will be loaded into Robosaru, which can then be used with the Flame key. Loading Fuel into the Feed Box will drop money for the depositing Bunny if Autopay has been set.

Charred Corpses are inert objects that cannot be purchased from the buy menu. They occur whenever a bunny is killed by lasers, electricity or fire. When placed in the Feed Box, a crippling amount of money is deducted from the bank of the player controlling Robosaru. Corpses come in two sizes, small and large. The small corpses are just the body or the head, and deduct 1000¢. The large is the corpse of the whole bunny, which deducts 1500¢. 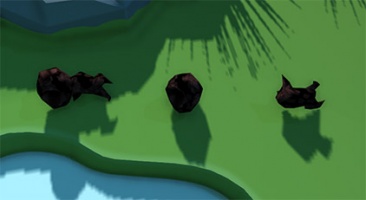