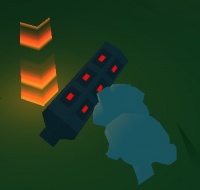 Laser Walls are placeable items costing 70¢, and are purchased as single poles. Two poles placed in a row will generate a deadly beam that will turn any Bunnies who touch it into corpses. Placed poles will lock to a grid, and will generate a beam to any pole in a cardinal direction that is within 6 tiles. Beams between Laser Walls regenerate every time a new Laser Wall is placed somewhere in the map, or uprooted by Robosaru. If there is an obstruction at least 2 Uranium high between two Laser Walls when the beam is to be regenerated, the beam between those two Laser Walls will not generate. The beam will regenerate again the next time a regeneration occurs if the obstruction is removed. 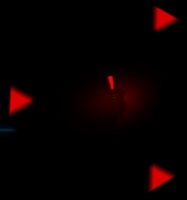 Collars are a passive item costing 40¢. They show an orange arrow above them to only Robosaru at all times, to allow tracking of their location. Robosaru can detonate any collar by targeting it and by pressing Prev. If the Collar is being worn or held by a bunny at the time, the bunny will die. Collars generate an additional 4¢ every two seconds for the Bunny who is holding or wearing one. This bonus does not apply inside the Dropship, and it does not stack. The Collar also provides the Bunny immunity from Sentry shocks. 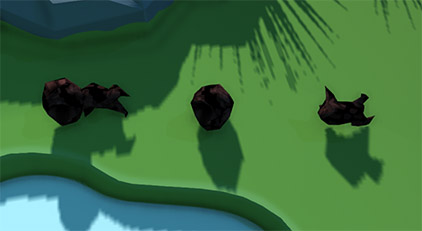